I decided to create a mirror site of the Lab here on WordPress as some are finding it difficult to leave comments on Blogger.

My first post on the Lab was The Two Faces of Janus which you can read here.  I have been on a long and incredible journey since I wrote that post and it seems in some ways I have come full circle.

Janus was an androgynous being with two heads one looking forward into the future and one looking back into the past.

This past weekend on the latest episode of Doctor Who Janus appeared again as a girl dressed as a boy with two heads. 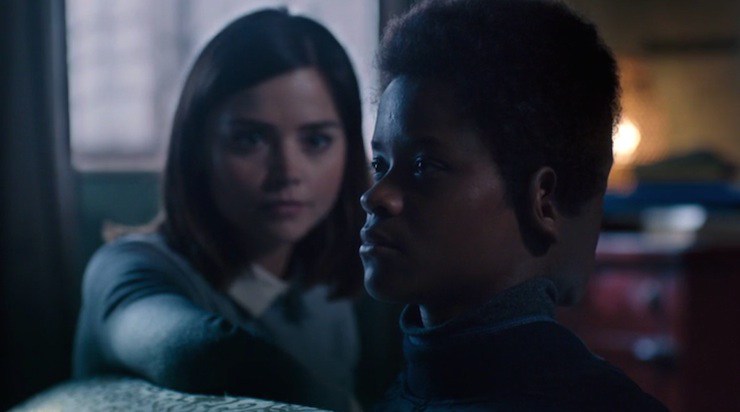 They too could see into both the past and the future but only one face could speak at a time while the other appeared to be asleep.

The storyline goes like this…. the Doctor and Clara have a grand old time getting kicked out of the most beautiful garden in the universe. When they get back on the TARDIS, the phone rings, and Rigsy (from last season’s “Flatline”) is on the phone. He has a tattoo on the back of his neck that is a number… which keeps counting down.

Children of the Stones.

They end up stumbling onto an alien refugee camp run by Asshield dr—now known as Mayor Me.

The Doctor and Clara represent Adam and Eve who have fallen from the Garden. They then forget who they are until the phone rings… its also an alarm clock that is counting down ….its a wake up call. The number 537 is an important one as firstly the number 53 is a resurrection number.

Isaiah 53 is famous as it was written some 700 years before the birth of Christ and yet depicts His future death and resurrection. It talks a lot about self-sacrifice and Christ dying on behalf of others. In the Doctor Who storyline Clara puts her own life in danger to save Rigsy by transferring onto herself  his sin his mark his tattoo that is counting down to death. On another level SHE/HE has removed the gene responsible for death that is encoded into our DNA the gene which starts counting down from the moment we are born.

If you notice you will see that the number on the back of Clara’s neck when it is transferred is 33 the age that Christ was when he was sacrificed. It also represents the 33 vertabrae in our spine the 33 steps of Jacobs Ladder that reaches into the spiritual realms and  when SHE/HE reaches the top it results in the awakening of the third eye. The number 7 that is shown along with the  number 53 represents the Seven Faces of Eve the Seven Sisters the Seven aspects of the Holy Spirit being resurrected.

They go to speak to Anah’s son, Anahson—who turns out to be her daughter. She was hiding as a boy to stay safe, since only the females of their species have the ability to see through time. Anahson knows Rigsy is innocent of any crime and that Mayor Me created this whole lie to bring the Doctor to the camp.

Mayor ME is the accussser  who brings judgement… in Game of Thrones she is the assassin who brings death and she has many faces as she is a shapeshifter.

Mayor Me represents Justice the Law the Pole Ice the Ice Queen who wants to sit in judgement over us and hand out punishment. Mayor Me also represents the Pharisees who demanded that Christ be put to death even though He was innocent in the same way Rigsy and Clara were innocent.

Mayor Me has two guardians standing in the doorway blocking the Way Out.

They go back to the chamber where Anah’s body is being kept, and the Doctor realizes that she’s still alive, just being kept in stasis. The only way to release her is through the control panel, which has a keyhole for the TARDIS key.

Anah also represents Eve and  once again  She is depicted as black. Eve is asleep and trapped behind a magnetic forcefield or grid. and needs to be reawakened. Eve’s release brings back Love as Love casts out fear and She also bring’s back Mercy as Mercy triumphs over Judgement. The only way to free her is with the Doctor’s key. Only you have to turn it upside down!

The Secret Lies with Charlotte

This mirrors an episode in a previous series of Doctor Who where his wife (the Tardis) is trapped behind a grid and needs a key to be released.

Mayor Me and Eve are half-sisters one holding the other captive and Mayor Me want’s the Doctor to free his Bride so to trap him once again. Which is why the camp is called a Trap street and is hidden in plain sight with echoes of Diagon Alley from Harry Potter or maybe it is more of a diagonal maatrix. 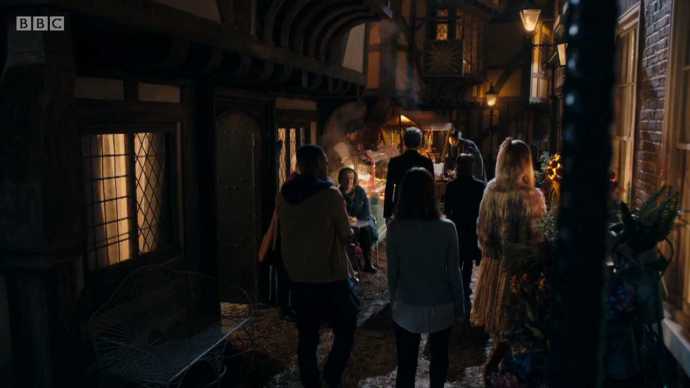 Once the Doctor/Adam inserts the key Eve is released but he is then trapped with a wrist lock which will eventually transport him somewhere else and the search to be reunited will begin again. It is a replay on repeat, a love story played over and over only told in different ways each time.

Then Mayor Me appears and informs them that she cannot save Clara so Clara must face the Raven the Shade of Death. Shade is an anagram of Daesh/Isis who are also currently hitting the headlines for causing Death and carnage in the camp.

So because Clara is a companion that has seen so much of the Doctor’s life, she’s one of the few who can ask him not to rail at her death and become the worst version of himself. She echoes the words that she said to him back when he wore a different face: “Don’t be a Warrior. Promise me. Be a Doctor.”

The truth is he has to be both at times in perfect balance between the masculine and feminine, and the same applies to her.

The Doctor also wears different faces and heads throughout time which is a subject I am going to be delving into some more in the future.

Clara tells herself to be brave and goes out to face the Raven she stands waiting for Death in a Christ-like pose. Her death is shown as slow and painful from many different angles just as depicted in Isaiah 53. She is the Queen of Scars… Queen Victoria..Alexandrina.

This is where the fairytale story ends.

However it is to be continued once again although the point is he/she is not trying to be cruel just trying to get you/me to remember to jog your/our collective memory.

Only this time we must learn from the missstakes of the passt. We cannot FALL for the same trick.

Adam and Eve were beguiled by the serpent.

charm or enchant (someone), often in a deceptive way.
“he beguiled the voters with his good looks”

The above is not real love it is an illusion an artificial copy it is only TRUE LOVE’S KISS that can fully reawaken us…from someone who truly loves you unconditionally.

It’s time to wake from our slumber and to remember WHO we truly are.

Excerpt from my book Babylon’s Burning:

Also Fortuna had a temple at the Forum Boarium. Here Fortuna was twinned with the cult of Mater Matuta otherwise known as Aurora … the goddesses shared a festival on 11 June … 911.”

That date struck a chord with John as his mother had died on that date in 2002, there was great significance to that he was sure of it.

“That links to our conversation on the Aurora shooting of the 15th February exactly two months before the Notre Dame fire.” Annie’s synapses were firing brightly now. “So Aurora referencing a new dawn or a new age about to begin which also means the old has to be destroyed and from what we have seen this time not by a flood but by fire.”

John stood up to applaud however Annie stopped him. “Hold on I am not finished, it also represents a new birth like a phoenix rising from the ashes of the old world … which all links back to 2012 and the Dark Knight Rises shooting at Aurora. Maya means illusion so the end of the Mayan calendar in 2012 signifies the end of the illusion and the end of an age.”

John was whistling and clapping loudly now whilst Annie was looking up the definition for Maya,

“Maya, (Sanskrit: “magic” or “illusion”) a fundamental concept in Hindu philosophy, notably in the Advaita (Nondualist) school of Vedanta. Maya originally denoted the magic power with which a god can make human beings believe in what turns out to be an illusion.

62 thoughts on “Remember Me”